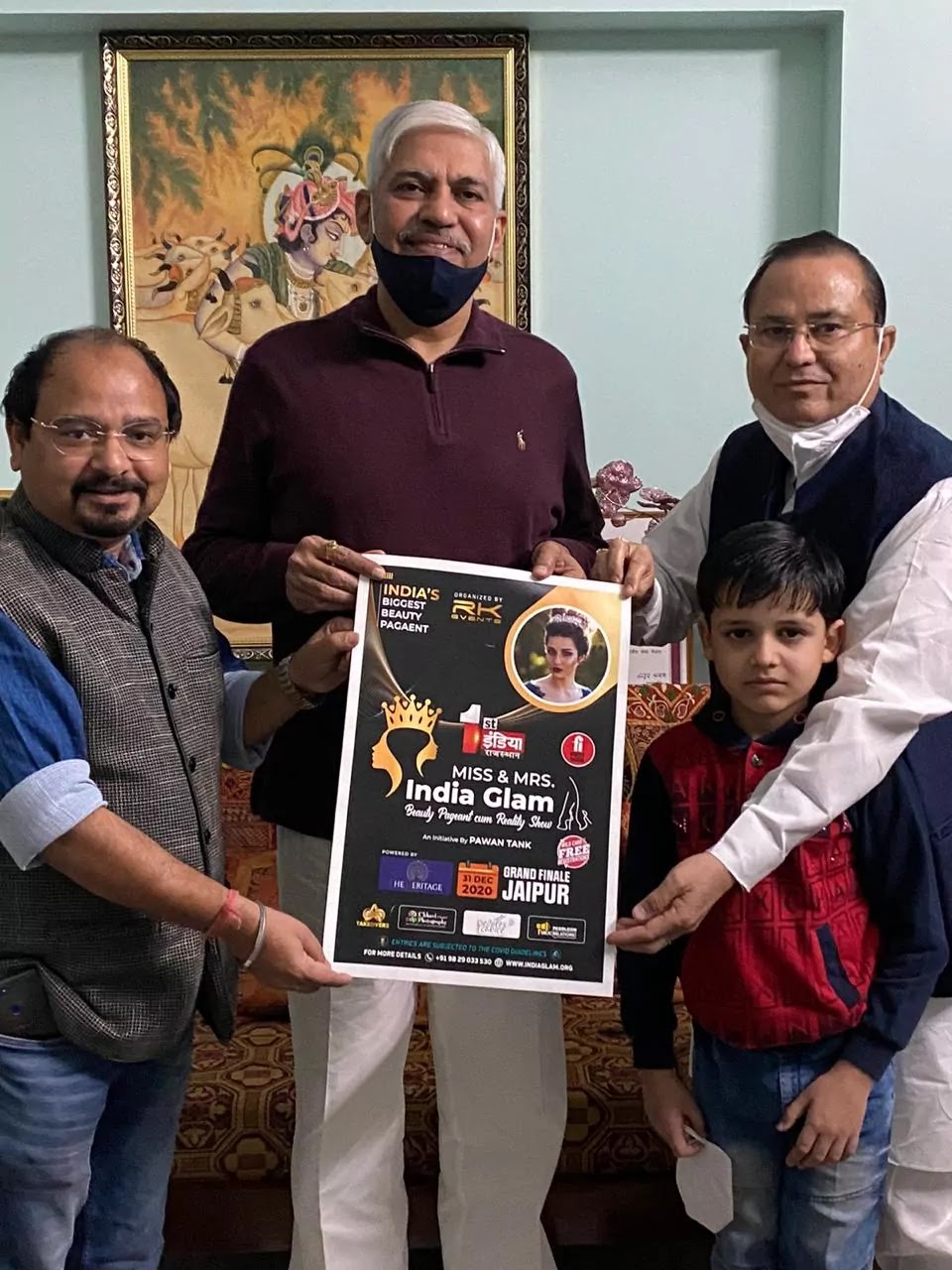 Rajasthan Police Rajasthan Government B.C. L. Soni said that the talented women of today who represent half of our country’s population have every right to choose their lifestyle and live it with their own self-respect in their own way. And for the rights and protection of women and girls, Rajasthan Police is always ready and alert. B. L. Sony expressed the release of the poster of Miss and Mrs. India Glam Season-2 to be held in Jaipur with the objective of public awareness and women’s empowerment towards the said Edgar Covid-19.

Tokyo Olympic medalists Neeraj Chopra and PR Sreejesh are going to be seen as special guests in the upcoming episode of Amitabh Bachchan’s popular TV show ‘Kaun Banega Crorepati-13‘ (KBC-13). The promo video of this ‘Fantastic Friday’ episode is going viral on social media. It can be seen in the promo video that Amitabh Bachchan is very happy with the arrival of star javelin thrower Neeraj and Indian hockey team player Sreejesh on the show.

The promo video of this special episode was shared by the channel on social media and wrote, “To bring the name of our country to the stage of KBC-13, Tokyo Olympic medalists Neeraj and Sreejesh. Hear their struggle and experience in the Olympics. Kaun Banega Crorepati on September 17 at 9 pm. In the video, it can be seen how warmly Amitabh Bachchan is welcoming both the medalists to the show. Along with this, Big B is also seen raising slogans of ‘Hindustan Zindabad’. In the promo video, Amitabh Bachchan asks both the players, ‘Can I touch this medal?’ After which Sreejesh and Neeraj give their medal to Big B. During this, Amitabh gets emotional and there is a calm atmosphere on the set. Neeraj also teaches Amitabh to speak Haryanvi in ​​the show.

Sreejesh narrated the story of the struggle

Sreejesh explains how this Olympics has changed everything for him. Whereas earlier those people were made fun of. He says that we qualified for the 2012 Olympics, but did not win a single match then. When we came back to India, everyone started laughing at us. If we went to a function somewhere, we used to make us sit in the back corner. It was insulted so much that once it was thought that why are we playing hockey… Now the time has come that in Tokyo Olympics 2020, we told the players that think here that there is no next match. When I got the medal, it felt that the more I heard, the more I struggled, the more we cried. Let us tell you that Neeraj Chopra won the gold medal in the javelin throw event in Tokyo Olympics 2020. While PR Sreejesh in the Olympics. He is part of the bronze medal-winning Indian hockey team.

Recently a press conference was held for the film ‘Thalaivi‘, in which Kangana Ranaut shared her opinion on Hollywood films and also talked about Global Monopoly. At the same time, he feels that Hollywood films need to be discarded which will also help in making a ‘self-reliant India’.

Kangana wrote in her statement, “Hollywood has hurt other industries by creating a global monopoly. They are occupying our screens. We will be watching the dubbed version of Lion King or Jungle Book instead of the dubbed version of a Malayalam film.” We need to enjoy our films first, be it Malayalam, Tamil, Telugu, or Punjabi. We should give priority to our people and our industry and watch fewer Hollywood films. This is the way to make a self-reliant India “

Kangana will also be seen in ‘Dhaakad’ and ‘Emergency’

‘Thalaivi’ former Tamil Nadu Chief Minister J. Jayalalithaa’s biographical film. The film is jointly produced by Vishnu Vardhan Induri, Shailesh R Singh, and Hitesh Thakkar. Arvind Swami will be seen in the role of MGR in the film. Apart from this, Kangana will also be seen in films like ‘Dhaakad’, ‘Emergency’. The shooting of the film ‘Tiku Weds Sheru’, which is being produced by the actress, will also start in November. Nawazuddin Siddiqui is in the lead role in this film. Kangana Ranaut targets Hollywood: Actress said – Hollywood has destroyed other industries by creating a global monopoly

The song has been released worldwide from Zee Music Label, has got more than 70 million-plus views so far.

Recently, on September 2, Actor Nishant Malkhani and Deepali Saini starrer romantic song “Tumse” has been officially launched on the zee music channel. Everyone is very much liked as soon as the song is released. Along with this, the song is getting tremendous love and support from the people. Reels and shorts of this song are also being made. In the lead artist of the song, Nishant Malkhani and Deepali Saini are seen showcasing their acting skills.

Amit Mishra associated with the song said that due to covid, along with limited resources, we have completed this project only by following all the shooting guidelines issued by the government. The shooting of the song has been completed at the locations at Della Resort Lonavala. We have shot this song as a concept-based story with full hard work, beauty, and creativity.

Film ‘Garuda’ based on Afghan rescue mission will be released on August 15 next year, Tabu will be seen in director Vishal Bhardwaj’s upcoming film

Bollywood actor Sahil Khan is facing legal trouble after his name cropped up in the attempted suicide of model and...

Film ‘Garuda’ based on Afghan rescue mission will be released on August 15 next year, Tabu will be seen in director Vishal Bhardwaj’s upcoming film

Filmmakers Ajay Kapoor and Subhash Kale have announced their upcoming film ‘Garud‘ based on the Afghan Rescue Mission. The film...

IT raid continues on Sonu Sood: locations including Corona Warrior’s office-hotel under investigation, financial records were searched for 20 hours

Income tax action on actor Sonu Sood continues for the second consecutive day on Thursday. From Wednesday evening to Thursday...

IT raids on Sonu’s office: Sonu Sood once came to Mumbai with Rs 5500, today owner of 130 crore property

The team of the Income Tax Department suddenly reached the Mumbai office of film actor Sonu Sood on Wednesday. Whatever...