Bigg Boss 2021 grand finale has done yesterday. The real winner of the show is Rubina Dilaik. A thorn collision was seen between the two. Rubina has surprised everyone by winning the show.

Rubina Dilaik, the winner of Bigg Boss 14 #BiggBoss14. The same possibility was already being expressed on social media that the winner of this time would be Rubina Dilaik and the same happened. She has won this trophy after defeating #RahulVaidya. Rahul Vaidya has been the first runner-up of Bigg Boss season 14 while Nikki Tamboli has become the second runner-up.

In the same way, she went to the chowk and shouted in excitation, Rubina left all and started going to her family when Salman stopped them and said “Hey Rubina we liked that you are leaving the trophy and running towards the family but take this trophy.” Rubina then took the gleaming trophy in her hand.

In such a situation, Rakhi took this risk, and later she came to know that her decision was right as Rakhi was not in the top 3.
Earlier, Madhuri Dixit also appeared on the show. Madhuri joined via Live and called the contestants of the show the best of luck in her special style. On the show, Ritesh Deshmukh, Nora Fatehi, and Dharmendra also had a banged entry. 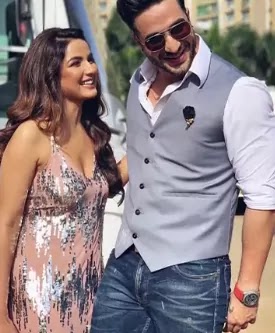 Yeh Hai Mohabbatein actor Aly Gony is going to be a part of the reality show Bigg Boss soon. The actor received the offer at the beginning of the show, though he declined the offer due to Boney Kapoor’s web-film. Aly is very close to Jasmine Bhasin, the current contestant of the show, and is also supporting her on social media following this season continuously. Now the actor himself is going to surprise the roomy girlfriend Jasmine by taking an entry into the show.

Aly Goni is scheduled to enter Bigg Boss 14 on November 4, with a promo video released by the channel earlier. In which Aly is clearly saying that she has not seen Jasmine’s tears in the last episode, due to which he has decided to come on the show. In the promo, Aly said, You are more precious than the best friend, your laughter is in my laughter, so thought I would bite these three months, remember those moments. But then you saw tears in your eyes and changed your mind. Your friend is coming on 4 November.

Aly was scheduled to be sent home at the beginning of the show along with Jasmine Bhasin, but actor Boney Kapoor was busy with the upcoming web film Jid produced at that time. In this film, Aly is playing the role of an army officer whose shooting is completed in October. Aly and Jasmine have been in the news for the past few months due to the ever-growing closeness that being shown on the show can be beneficial to the makers. This is why Aly was offered to appear on the show again.

Aly can be the most expensive contestant

It is being told that Makers were given such a big offer by the makers to come to the show that they could not deny it. According to Spotboye’s news, Aly is being paid more than the show’s most expensive current contestant, Rubina Lilac. Rubina is getting 3 lakh rupees every week.

Bigg Boss 14: Rubina Dilaik did not get entry into the house, refused to work

Recently, Colors Tv’s popular reality show Big Boss Season 14 has started. All the contestants are coming in their bright colors in the Big Boss house. The second day of Bigg Boss “Stormy Seniors” Siddharth Shukla, Hina Khan, A small debate ensued between Gauhar Khan and all other contestants. Siddharth stops Jasmine Bhasin from completing his work. Later, inside the house, Shehzad Deol told Nikki Tamboli that he should change his way of talking.

At lunch, Gauhar Khan asked Pavitra Punia to distribute his food in a fair manner to the contestants. This angered Pavitra Punia and she refused to eat food, and after this Punia’s reaction surprised Gauhar to apologize to her.

Later, Hina Khan announced the first task of Big Boss. Which was for rejected contestants. These contestants include Rubina Dilaik, Nishant Singh, Sara Gurupal, and Jan Kumar Sanu. Rejected contestants were given the opportunity to secure their place in the house, but fot his they had complete the tasks set by the “Stormy Seniors”.

After Siddharth, Hina and Gauhar strategize about the tasks, they tell Rubina to wear the same clothes for a week. When she refused, her husband and co-contestant Abhinav Shukla explained that she may have to move out of the house due to not following the rules.

The rejected members of the house are Jan Kumar Sanu, Nishant Malkani, Rubina Dilaik, and Sara Gurupal. Big Boss says that these four people will decide who will go to three houses and whose performances have been most disappointing will remain in the garden area. Ultimately, it was decided that Rubina Dilaik would stay in the garden area and the remaining three people would go inside the house.

On the third day, a fight ensues between Rubina and Jasmine over their favorite things. Rubina wanted to keep a pair of slippers but Jasmine said she could not compromise on her makeup kit. The battle escalated between Sara Gurupal and Nikki, among other contestants.

READ ALSO | Big Boss 14: The picture leaked from the set, these contestants were seen with Bhaijaan

Big Boss 14: There is a favor in Bollywood music world: Rahul Vaidya

The list of works of Vaidya (Rahul Vaidya) includes the album ‘Tera Intezaar’ and ‘Beinteha’ from the Race 2 film.

Singer Rahul Vaidya, one of the contestants of the news season of Colors Tv’s reality show ‘Big Boss 14’, says that not only is talent and ability enough to make a mark in the Hindi music world, but also with it a lot of other things have to be done as well. Vaidya (Rahul Vaidya) one of the second runner-up of the first session of the singing reality show ‘Indian Idol‘.

Vaidya (Rahul Vaidya) says that most of the singers currently working in the film world have worked as assistants to music directors or have been associated with a music label. He said that for example singer Arijit Singh has been an assistant to music director Pritam, Armaan Malik is the brother of music composer Amaal Malik while Zubin Nautilya is assoiciated with music sector company T-Series.

In an Interview with PTI-Bhasha before entering Big Boss house, he said, “A lot things works behind any singer getting a film song. Not only talent and competence work, many other things also work. For example, giving prefrence to someone, you can also call it lobbying. There are many capms in Bollywood music Industry.”

He said that even before this he had been offered ‘Big Boss’ many times but he could not say yes to this as it comes in the last time of the year and it is a busy time for the performers. He said that the events due to the COVID-19 epidemic are canceled this year, so it was the right time to come to Big Boss.

Vaidya says that he has never advocated any way to get a song in Bollywood and he says that he represents himself.

READ ALSO | Big Boss 14: The picture leaked from the set, these contestants were seen with Bhaijaan

Improvement in health of Actor DILIP KUMAR, discharge from hospital

TV actor lodged the FIR of fraud of Rs. 86,000 by a cyber fraudster

These ’90s fashion trends are making a comeback in 2017

According to Dior Couture, this taboo fashion accessory is back

Illinois’ financial crisis could bring the state to a halt

Improvement in health of Actor DILIP KUMAR, discharge from hospital

Due to Corona, ANUSHKA SHARMA did not celebrate the birthday, said- Virat and I will help in difficult times!

Bollywood actress Anushka Sharma celebrated her 33rd birthday on 1 May. This year, Anushka’s birthday was very special because it...

SONU SOOD could not save the life of a fan, expressed sadness on social media

This second wave of Corona virus has caused a great panic across the country. Every day millions of people are...

As the action-thriller drama ‘Extraction’ completed one year of its release today, Bollywood actor Rudhraksh Jaiswal also known as Extraction...